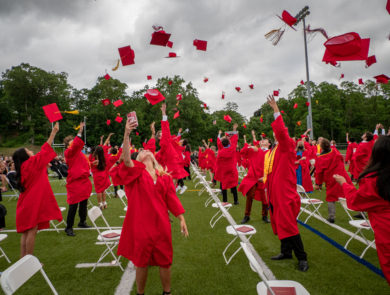 SPRINGFIELD – In the history of Catholic schools in the Springfield Diocese, the Class of 2021 may be known as “The Pandemic Class.”

But the 78 graduates of Pope Francis Preparatory School, here, faced unprecedented challenges with resilience and focus on their goals, said graduating senior Eric Tran. Speaking to Catholic Communications before the June 3 commencement exercises on the school’s soccer field, Tran said the last year “was hard for everyone in some way.”

But, he said, the students persevered by “just trying to keep a positive mindset, knowing where your end goal is, where you’re going to get to, and trying to make every little moment count.

“So, whether it just be lunch, even though there’s a divider, just trying to talk to your friends, make friends that you haven’t talked to in a while,” he said.

Tran, a member of St. Paul the Apostle Parish in Springfield and one of the 10 students ranked highest in academic excellence at Pope Francis, also played soccer for the school and said school athletes made the best of a senior year when there were few games. “We just made the best of it,” he said. “We prayed before every game, we had fun, we laughed, even if the game was just a scrimmage. So, little things definitely made this year a little bit better.”

In her address to classmates, the school’s salutatorian, Anna Kelly, said, “We have faced adversity, especially in this last year, but the challenges have made us stronger.”

Kelly urged the graduates to hold on to their faith and also told them, “High school does not define who you are.” She gave examples of times students may have disappointed themselves and others but said the experience was “about creating ourselves and finding our gifts as we leave today.”

“It’s our time to take on the world,” Kelly said. 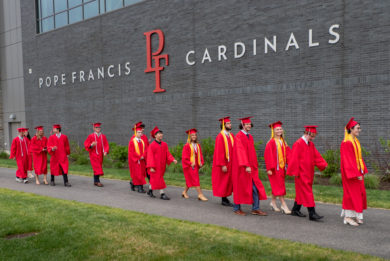 Paul Harrington, head of school at Pope Francis, said resilience was the “number one” characteristic he saw in the Class of 2021. Interviewed by Catholic Communications shortly before the 4 p.m. graduation ceremony, he noted that the school was fortunate to be able to safely be open during the last academic year.

“And I’ve never, ever seen students so happy to come to school, especially seniors. It didn’t matter that they had to put a mask on, they were happy to be here, because they watched a lot of friends in their neighborhoods learn from home,” he said. “And we were able to provide as close to normal as possible an opportunity for them to have a senior year.”

Harrington said that while all members of the school community worked to make the school year possible, “It really was the resilience of those kids in this class, who made it. They stayed focused ‘til the end, they got into some great colleges and universities. And they saw the prize, they went for the prize and they stayed on target.”

“And I think this year that was so much more important, and, what sometimes we might take for granted, being a Catholic school, was right there and it was tangible this year, and it helped us really accomplish our goals no doubt.”

Not surprisingly, valedictorian Julia Calderon began her farewell address by thanking God as the source of strength during the pandemic experience. “We never skipped a beat,” she said. “We were able to see God’s blessings more clearly than ever before.”

In his interview, Tran praised the staff and faculty at Pope Francis for giving him the opportunity to find his strengths and pursue his passions, one of which is leadership skills. But he also said what he will cherish most from his high school years are the friends he made. 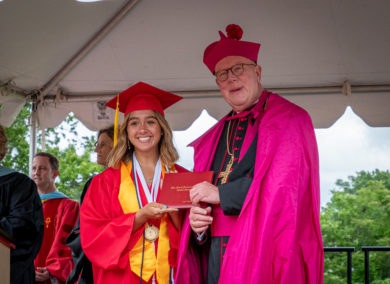 Before the awarding of diplomas, Springfield Bishop William D. Byrne took the stage to offer “Five Pieces of Advice” to the graduates. With threatening clouds overhead and the wind blowing his cape behind him, he joked, “Today I get to wear the hat and the cape – I can fly in this thing.”

The first item on the bishop’s “five things” list was that the students should “become an ‘I’ before you become a ‘we,’” encouraging them to get to know themselves better during the next stage of their lives.

The second piece of advice he gave, to nods of approval from parents in the crowd, was “Wake up in your own bed alone every morning.”

Thirdly, Bishop Byrne encouraged the students to “make your world a little bigger… Try something you’ve never done before.”

His fourth piece of advice was that the students should travel to places both far and near. “The more you see of the world, the more you’ll realize that you’re not the center of it of it,” he said.

“You have a lot to be grateful for and God is the source of all of that,” Bishop Byrne said.

And although graduation day is a time for leaving, Harrington told Catholic Communications he hopes the students will maintain ties with their alma mater. He said his parting message to them is: “Come see us, tell us how you’re doing, stay in touch with each other and stay in touch with the future Cardinals here at Pope. And they’re part of that legacy that we’re establishing here with our identity as Pope Francis Prep.

“So, my message to them is, ‘This is always your home. Once a Cardinal, always a Cardinal. And you’re always welcome back.’”

A video version of this story will be featured on an upcoming edition of “Real to Reel,”which airs Saturday evenings at 7 on WWLP-22NEWS.